16 But Ruth replied, “Don’t urge me to abandon you, to turn back from following after you. Wherever you go, I will go; and wherever you stay, I will stay. Your people will be my people, and your God will be my God. 17 Wherever you die, I will die, and there I will be buried. May the Lord do this to me and more so if even death separates me from you.” 18 When Naomi saw that Ruth was determined to go with her, she stopped speaking to her about it. (Ruth 1:16-18 Common English Bible) 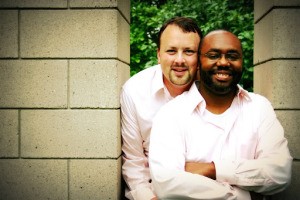 On my wedding day in 2007, we had a reception for family and friends at our house. I remember Daniel and I were getting things ready for the event. Daniel kind of gave me an order to get something done. I looked over to a friend who smiled and said, “you’re stuck with him now.”

A few years later, we had another ceremony with family in Western Minnesota. A month earlier, same-sex marriage became legal in Minnesota and like a lot of my friends who were coupled, we had a small ceremony. It was at this event that we signed our marriage licenses. If I wasn’t stuck with Daniel before, I now had a state document proving that we were truly stuck.

The movement for same-sex marriage has been in high gear since the Supreme Court rulings in 2013. More and more challenges in different states mean that at some point in the near future, same-sex marriage could be the law of the land.

As the push for legal recognition continues, the church is left wondering why should we care about this issue. In the debate over same sex marriage, there has been a lot of talk about the weakening of marriage or about the freedom to marry, but there has been little talk of what marriage does to the people in question, or at least what it should do. What has been shown are same sex couples kissing each other, holding hands and the like. What we see is what we are told by secular culture what marriage is all about: romance and personal fulfillment. What we rarely hear is what’s the theological underpinnings of marriage, let alone same-sex marriage. In their 2002 pamphlet, Preparing for Christian Marriage, John McFadden and David McCarthy explain how the world views marriage: Moonlight and roses; hearts and flowers. A young couple romping through the surf on a lonely beach, holding hands. A slightly older couple, cheering exultantly as little Jenny scores her first goal, or smiling ruefully as Tommy tracks his muddy feet across the recently cleaned kitchen floor. A couple advanced in years, still holding hands as they assist one another to the front-porch swing of a charming farmhouse. Such are the images of healthy marriage regularly featured in the media, particularly in advertising.

When we understand marriage only in reference to private pleasures and personal fulfillment, we lose the ability to understand how marriage in community will transform us. We miss the full meaning of living in communion with others “in sickness and in health, for richer and for poorer.” We miss the profound experiences of sharing difficult times, being present to each other’s suffering, working to understand each other and to communicate better, and joining together with others in making community life ‘life-giving’. Ironically, our culture’s emphasis on personal fulfillment limits our fulfillment as whole human beings. Common cultural understandings of love and community are shallow. In their fullness, love includes steadfast endurance, commitment, and duty; community includes finding ourselves through our dependence upon others, and their dependence upon us. Jesus’ words ring true: we gain our lives when we give them away, and lose them when we attempt to keep them for ourselves.

In contrast, marriage in a Christian view is more communal than individual, more about commitment and duty than just romance:
Our consumerist society encourages persons to pursue their own needs and desires at all costs. As a result, human relationships — marriage, family, friendship — are increasingly viewed as transitory and disposable. Families are now dissolved and created like corporations. When no longer useful, commitments are broken. But a clear contrast is found in the logic of Christian community, which gives a distinctive shape to Christian marriage. In community, each individual is an indispensable part of the body, with different gifts and duties. Likewise, each married couple is called to offer their special gifts to common life. Married couples are called to regard their relationship as a commitment that is more important than their own individual desires, and in doing so, husband and wife open the possibility of loving in a profound and life-giving way. Such a couple helps to make this a world fit for children to grow in, a world where children are loved and protected by adults who care more deeply about the future of the world’s children than about their own gratification in the present.

Marriage in this sense is counter-cultural in a society so thoroughly steeped in individualism, for it is centered in the conviction that we have given ourselves to a relationship that is more important than our individual wants and wishes, and that we are a part of something greater than ourselves. Whether we are blessed with children of our own or not, our marriages are a gift to the world’s children. Such a healthy marriage offers an alternative to a consumerist, individualist world, insofar as it puts into action the possibility of a deeper, more gracious way of life. In the way that we love, we will see the steadfast faithfulness of our forgiving God.

So marriage isn’t all about moonlit beaches, but it’s about being committed to a person, someone that we’ve placed above our own interests. Life becomes less “me, me, me” and more “us, us, us.”

I think that’s what commentator David Brooks was getting at in his April 2013 oped in the New York Times. He wrote that in a culture where freedom means having no obligations to anyone, marriage is something that binds two people together and in essence, means giving up some of that freedom. Further, he says, “Marriage is about making a commitment that binds you for decades to come. It narrows your options on how you will spend your time, money and attention.” Marriage in this sense is less about rights and freedom than it is about responsibility, duty and sacrifice.

Our society sees marriage as a right or a contract. There’s nothing wrong with that view, because yes, civil marriage is about those things. But the church is called to be countercultural, to see marriage in light of our being small “d” disciples of Christ. Religious marriage is about modeling our lives after Jesus, living for the other instead of yourself. If you want to see how this plays out in Scripture, I can’t think of any other passage than Paul’s letter to the Ephesians, chapter 5:21-31.

Now, upon mentioning this text I can already hear jaws dropping to the floor. This passage has a bad reputation because of how it has been interpreted. Most folks can’t get past Ephesians 5:22 which reads: “Wives, be subject to your husbands as you are to the Lord.” For those of us who believe that women and men, this is a hard passage to accept. But you have to keep reading to get a whole picture of the passage. Paul is talking about how husbands and wives should care for each other. While it might be a stretch to see Paul as some kind of proto-feminist, he is calling for different kind of relationship. Women might be called to “submit” to their husbands, but husbands are called to love their wives as Christ loved the church- meaning loving their wives sacrificially.

I know this verse doesn’t neatly fit for those of us who are LGBT. But you can get the picture: marriage, be it heterosexual or homosexual is not about self-fulfillment, but about caring for the other as you would care for yourself. When working properly, marriage should be about limiting freedom instead of expanding it. That’s okay, because limits aren’t all bad. In being married to Daniel, I don’t have the freedom to sleep around with others. I can’t just do anything I want. I have to take Daniel’s views and feelings into account. I am stuck with him.

Why should the church care about marriage? Because there needs to be an alternative view of marriage that is different from what the wider society tells us. Because it is a tool in helping us grow as followers of Jesus. Because it helps see that life isn’t about me, but about the common good which is sorely needed in this day and age.

At the end of the church wedding back in 2007. Daniel and I jumped over a broom. Being African American, I wanted this to be part of the ceremony. In the antebellum South, this ritual was done as a way to signify a committed relationships since marriage between slaves was illegal. Jumping the room means that Daniel and I enter into a new phase of our lives. We no longer live just for us, but for each other.

Ruth’s pledge to go with Naomi was in some way limiting her choice. She would have to learn to live in a different culture with a different language and different god. She lost a lot in her pledge, but she also gained a lot too. Limits in marriage may not be what we want to hear, but I think the benefits far, far outweigh the inconvenience.